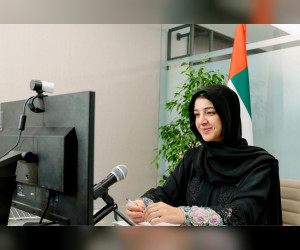 ABU DHABI, 30th June 2020 (WAM) – Represented by Reem bint Ibrahim Al Hashemy, Minister of State for International Cooperation, the United Arab Emirates participated in the Brussels IV virtual pledging conference on “Supporting the Future of Syria and the Region,” organised by the European Commission’s Humanitarian Aid Office, ECHO, and the United Nations with representatives of states and national and international organisations.

The conference aimed to mobilise additional humanitarian and development funds to support the Syrian people in Syria and neighboring countries, with more than 6 million displaced Syrians living outside the country and another 11 million in need of humanitarian aid across Syria.


Reem Al Hashemy reaffirmed the UAE’s commitment to supporting the Syrian people in times of crisis, particularly as they face the threat of the COVID-19 pandemic. She acknowledged the efforts of medical staff devoted to performing their duties despite a shortage of equipment and resources that places them at grave professional risk.

This shortage, she continued, requires us all to extend a helping hand to compensate for this lack of equipment and medical supplies.

Moreover, Al Hashemy extended her gratitude to the event organisers, notably the European Union and the United Nations, and recognised their consistent efforts to address the Syrian crisis.

She added, “The UAE values the firm commitment of the European Commission’s Humanitarian Aid Office to address humanitarian crises in countries neighboring the UAE and for its vision for the region, especially in responding to the Syrian crisis.”

After ten years of conflict and suffering in Syria, she noted that the UAE has been a longstanding supporter of the Syrian people, having provided over USD 1 billion of emergency humanitarian and development aid since 2012 to Syrian refugees in Jordan, Lebanon, Iraq, and Greece, in addition to those internally displaced within Syria.

UAE aid has included the provision of healthcare and the construction of field hospitals and refugee camps such as Mrajeeb Al Fhood a joint Jordanian-UAE camp providing assistance, protection, and social services which currently runs at $30 million.

The UAE, along with its partners the US and Germany, contributes to the Syria Recovery Trust Fund, SRTF.

She concluded her remarks by underscoring that the UAE believes that a political solution is the only manner of ending the Syrian crisis and fully supports UN efforts in this regard.

It is worth noting that the previous three Brussels conferences included many stakeholders in the international community and aimed to revive dialogue and back UN efforts to reach a political solution to the Syrian crisis in accordance with Security Council Resolution 2254. In addition, previous conferences offered donors the opportunity to announce pledges in support of the Syrian people.

Last year, the Brussels pledging conference mobilised a record 6.2 billion Euros in pledges for 2019, in addition to 2.1 billion Euros for 2020 and beyond.